Bingo has been around the world under this name since around 1929, but the game itself is much older. This parlor game should have its origin in Italy in the 16th century. An Italian state lottery was recorded in history in 1530, the rules of which are very similar to the bingo game. In fact, the world-famous lottery game in its original form is probably also the basis for bingo. 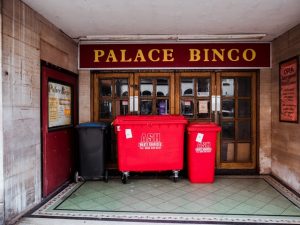 Lotto became very popular in Europe, including among elite circles, and spread across the world by the end of the 18th century. In 1929, a game called “Beano” was played under the original lottery rules in the southern United States. The Beano players used dried beans to cover the numbers drawn on their cards, and when a row was completely covered, he called “Beano”.

The New York dealer Edwin Lowe liked this Beano game so much that he imported it to New York and held game rounds there. Legend has it that a winner there called “Bingo” instead of “Beano” in the heat of the moment, and Lowe adopted the name because he thought it was better. Others were then allowed to host similar rounds of games for an annual license of one dollar to Lowe, but only if they also called the game bingo. Bingo has become so popular in Great Britain that it has its own arcades. Bingo games are also available on TV, online or as promotions from daily newspapers.

Rules of the game bingo

Edwin Lowe is not only the pioneer of the modern game of bingo, he also published the first bingo manual with all the rules of the game.  A bingo game usually consists of three rounds.

Although the basic rules of bingo have been the same since its inception, there are several different variations of this game of chance just like judi. Bingo is played in almost the same way around the world using almost identical rules.